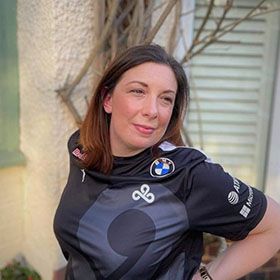 Lead Practicioner, LiFE Multi-Academy Trust
United Kingdom
Early in 2021 I got mistaken on Twitter for the, then, Cloud9 League of Legends Midlaner, Luka 'Perkz' Perkovi?.as we have very similar Twitter handles. This was picked up in a co-stream of Christian 'IWillDominate' Rivera and Marc 'Caedrel' Lamont who also saw from my Twitter posts that I have guinea pigs, one of whom, Fudge, has the same name as Cloud9 LOL top-laner Fudge. They also saw I am raising money for The Laura Centre, a bereavement counselling service in Leicester, and they both donated $500 each live on the stream. Something which was later reported by the local newspaper and the BBC. My current fundraising total stands at over '6000. Since then, I have been embraced by the League of Legends and Cloud9 community and I am a partner streamer for them. In the spring of 2021 I headed the Cloud9 'PLAY TOGETHER' campaign, in which I interviewed the CEO of Cloud9, Jack Etienne, interviewed some family members of one of the team, co-hosted a 1vs1 King of the Cloud match between Perkz and Fudge, with Captain Flowers, read the first edition of the BMW Manga comic 'Heroes in Rivalry' and I also hosted a tailgate before the finals, in which I made English Tea and Scones. Cloud9 have been very embracing of me and my strange position in their community, they even sold images of my guinea pigs on patches and stickers, raising '2000 for my charity. I have been interviewed by a few esports journalists such as Dom Sacco, Travis Gafford and Danny Burke for The Score Esports, with the final interview being a video which has been watched by over 300k people. My following on twitter is now over 17k, something which totally astounds me. In my normal life I am a Physics teacher and a Lead Practitioner, which means I support teachers and departments to develop their pedagogical practice. My dream is to use this new found platform to support students in my school who want to get into esports as a career and/or to play competitively. I want to create an esports club at one, or more, of the secondary schools in my multi-academy trust and build a gaming arena at least one of them. I would also like to run the Esports Btec for students to develop the skills and knowledge, enabling them to be able to access the multitude of career opportunities in this sector. I also want to use my platform and my educational background to support challenging toxicity in the competitive gaming space, especially those aspects that marginalise groups by gender, ethnicity, sexual orientation, disability or learning difficulty. I have no idea what the future holds for me, but I can honestly say that what has happened to me, initially by chance, has changed my life. I am forever grateful to cloud9 for their constant support and to Luka for not getting cross with me for riding on his coat tails. All I can say for now is watch this space!